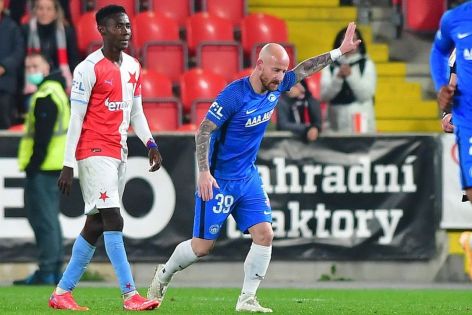 Stoch´s comeback to Slavia home stadium was the main pre-game issue in Czech republic, where media highlighted Miroslav´s big successes within the two years spell such as championship title, 2 cup trophies, participation in UEFA Europa League and other individual awards.

Miroslav, actualy contracted to Slovan Liberec, started the special game around 70th minute when the score was 2:0 for home team. He needed just few minutes to score the fantastic contact goal. Unfortunately, the game ended with 1-3 defeat.

"I am happy for that goal, because it was the first after my spell in Slavia, but honestly it was not that important, because we have lost," admits Miroslav, who enjoyed strong applause from home fans after the game.

"I really appreciate the attitude of Slavia fans, we have good relationship and the way they welcome me here is something to remember," adds Miroslav.

When he scored the goal, he refused to celebrate it as a gesture of respect towards the former club.

"We knew Slavia has many injured players and cant play their best, but they still managed to win the game. This shows the quality of the individuals. I think we could make better result, but in the details was Slavia better and scored three goals. This was the main issue," concluded Stoch.