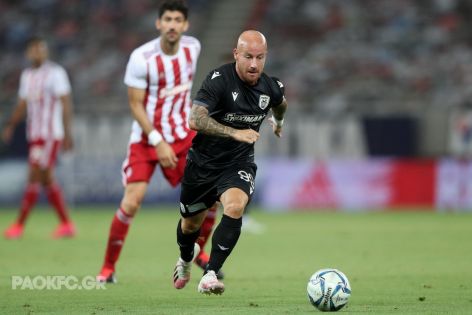 Olympiakos vs PAOK is always a big battle. Sunday night wasn´t different, although Pireus based club has the championship trophy already in the pocket. Thanks to 1-0 win, PAOK remain in the driving seat for second place and a place in the Champions League qualifiers.

"We are very happy to make three points. It´s not only derby game, but when you look at the table, you can see that we have to fight hard to collect the ticket for Champions league," says Miroslav Stoch, who came-in during the goalless score in 20 minutes remaining. All important happened after that.

After Miroslav Stoch’s free-kick was blocked by the Olympiacos defence, Rodrigo sent over an inviting cross from the right side and Mihaj headed into the net from an unmarked position at the back post.

"We did not get back to Thessaloniki after the game, but stayed in Athens. The programme is really tough and we focus now on game in AEK. We would like to make a revenge for the previous home game, when they beat us. We know Wednesday is crucial game for us," added Stoch.

PAOK headed into the game in Karaiskakis in buoyant mood given the decision from CAS which saw their seven points reinstated. Although the case is still open, football people consider this as a victory for PAOK who were most probably unfairly accused of multiple ownership.