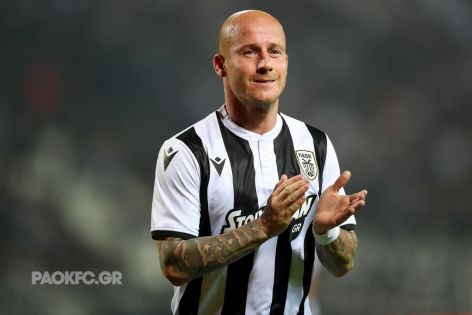 It´s been a long time for Miroslav to wait for first eleven. Experienced player, who turned 30 a day before the match, was one of the best on the field when PAOK beat Lamia 3-0.

"I am so happy for this game. We´ve managed it very well since early start and earned three goals lead. It could be more than 3-0, but we have to accept that it was our first comfortable victory and the first one with clean sheet as well," admits Miroslav, who assisted on third goal of PAOK.

He was very close to wonderful goal from free-kick, which was finally denied by goalkeeper´s great save. "I think he made one step forward, which helped him to save it. Our fans were great, I would be happy to score some nice goal for them. I hope next time it will go."

Miroslav played 75 minutes. He earned a great applause when coming off the field, which shows his good reputation with PAOK supporters.

"They are amazing. The stadium is almost full all the time. Fans don´t make difference whether you play against top or medium team. They simply support PAOK, which is great," added Stoch, who turned 30 the day before game.